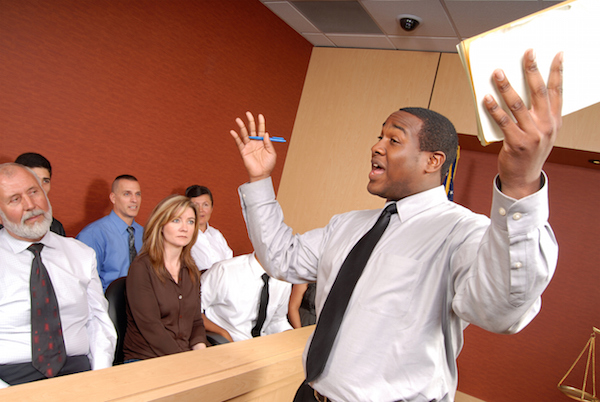 One of the studies that I like to cite more than just about any is the old 3M study that showed that people remember only about 10% of what they are told three days after it is told to them. Apply this to a trial setting and the implication is that jurors will forget up to 90% of what they heard over the course of a trial by the time they reach the deliberation room. To put it a different way, by the time jurors reach the deliberation room, they are overwhelmed, do not remember the majority of what they just heard, and face the difficult task of having to sort through hundreds to thousands of exhibits, their largely disorganized notes, and a stack of jury instructions that can be difficult to decipher.

Enter “The law of least effort.” Nobel prize-winning professor of psychology Daniel Kahneman describes it, the law of least effort means that “if there are several ways of achieving the same goal, people will eventually gravitate to the least demanding course of action.” We see this all the time in our mock jury deliberations. When facing the confusing and difficult task of trying to make sense of a lot of complex information and arriving at a verdict from it, jurors tend to latch onto what is easiest for them to understand. This becomes the focal point of the discussion and often determines the outcome. As the cliché in our industry goes, a verdict is the product of what jurors choose to talk about most in deliberations. Every case has many potential focal points, each of which may lead to a different outcome, so it is important for attorneys to find ways to offer jurors the simplest and most beneficial focal point.

1. Determine which instructions are most important. If everything is important, nothing is important. Jury instruction packets are getting longer and longer, and jurors cannot and should not be expected to use all the instructions appropriately as they decide the case. Ideally, that is what would happen, but practically, it never happens. Instead, jurors focus on those few instructions that shape their discussion of the issues, and to a certain extent already fit what they believe will be most helpful to their position. Attorneys should do the same in their closing arguments. Pick the 3-5 instructions that are most important and make those most salient in the closing argument.

2. Visually present the key instructions. I began this post by talking about the 3M study that found that people only remember about 10% of what they are told three days after it is told to them. Notably, the same study found that the retention rate increased to 65% after three days when the information was visually presented. There are two ways in which attorneys can visually present key jury instructions. The first is to include them on a PowerPoint slide with highlights of key language as in the following example.

The second way is to create a graphic that visually demonstrates the concept being addresses, i.e., proximate cause, breach of contract, infringement, etc. We created the example below for a defendant that was facing allegations of fraudulent misrepresentation at trial. The trial judge determined before trial that a misrepresentation had occurred, and jurors were to decide the remaining elements (i.e., reasonable reliance, knowing misrepresentation, materiality, etc.). A key concern was that jurors would just assume the remaining elements once they were told that a misrepresentation had been made. We were concerned that simply showing them the instruction with each of the elements would not be sufficient, so we created this graphic.

In this graphic, we used the visual analogy of baseball and described the judge’s ruling as equivalent to a single for the plaintiff. We argued that a single does not mean the plaintiff wins because they still had a lot of work to do at trial to get that runner home. It helped that this trial occurred in a city that has a reputation for having one of the largest and most devoted fan-bases in all of baseball. Our mock jury research found that, while not everyone liked this graphic, they used it in deliberations and it was effective in forcing a quality discussion on the remaining issues.

3. Tie the evidence to the key instructions. Finally, attorneys should tie the evidence to the different elements of the key instructions. It may be obvious to attorneys, but jurors do not always understand which evidence speaks to which element of the claim. I have seen so many mock jury deliberations where jurors misapplied evidence, so it is important to fill in the organizational structure.

When done well, these simple techniques go a long way in arming your advocates on the jury (i.e. those who are motivated to fight for your client in deliberations) with the tools to effectively control the focus, “box out” opposition arguments, and drive home a verdict in favor of your client.