The Importance of Graphics as Courts Shift to Telephonic Hearings

How do you start a blog about what we are all going through right now? Most of us have never experienced anything like this before and making the adjustments that we are being asked to make is difficult at times. I was telling my kids earlier today that I am not sure everyone in our household is going to survive this pandemic and that has nothing to do with Coronavirus.

Different parts of the United States seem to be adjusting in different ways based on the number of cases in that particular area. In Seattle, we are ground zero for the United States, so we are seeing some more aggressive actions being taken. There are no trials or in-person hearings in our federal courts in the Western District, and our state courts in King County have gone to only a single trial in the courthouse at a time.

Across the country, the most consistent change that I have seen in our cases is that hearings are not occurring by telephone rather than in person. Earlier this week, I participated in a conversation with a client who was struggling with the idea of a telephonic hearing because they thought the in-person presentation was so critical to their position on the motion. Unfortunately, there was no other choice, so the conversation shifted to how telephonic hearings impact the presentation strategy. In this blog post, I want to focus on graphics because I think this creates an opportunity to think about new and different ways to use graphics in hearings.

To be very clear, when I talk about “graphics,” I am not talking about exhibits. I say this because I have found that some attorneys think of exhibits being projected onto a screen when they are talking as graphics. When I use this term, I am talking about timelines, decision trees, and all of the other ways of visualizing your argument on screen or paper.

It is difficult to overstate the value of graphics in litigation. There has been enough written on the topic that I will not devote a lot of time to it here, but in general, research has shown that graphics enhance persuasiveness, understanding, and retention among other things. Unfortunately, the shift to telephonic hearings limits the ways attorneys can use graphics in the ways they traditionally have in in-person hearings. However, opportunities remain and I would argue that capitalizing on these opportunities is more important than ever before because of the limitations of telephonic hearings. With that in mind, here are three ways you might consider using graphics in conjunction with your telephonic hearings. 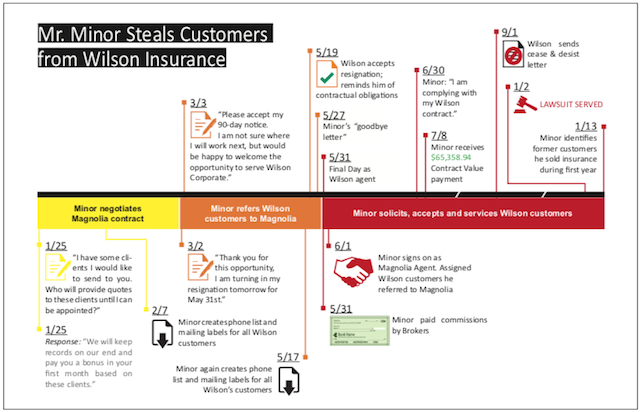 Incorporate graphics into your briefs. This is nothing new. It has been happening for a while, though it still does not happen often enough. Knowing that you will not have the opportunity to stand in front of the judge and point to timelines and such, you should think about just inserting them directly into your briefs with captions that explain what it is that you want the judge to take away from the graphic. Ideally, a well-designed graphic speaks for itself, but there is nothing wrong with giving the judge a little guidance as well with a caption. It is incredibly easy to insert a picture into a word document. You can wrap text around the picture to save space and help you stay within your page limit, or you can attach the graphic as an exhibit for reference (or perhaps both with the one in the brief being smaller and the one in the exhibits being a full-page version).

Submit graphics to the judge prior to the telephonic hearing. In addition to inserting key graphics into briefs, attorneys should consider sending a few key graphics to the judge in advance of the hearing. These can easily be sent in pdf form. However, this format could have implications for the design of the graphics. In an in-person hearing, an attorney might have a few PowerPoint slides that include animations that the attorney believes are important to making the point. Obviously, you cannot include animations in PowerPoints, but you can take a different approach to the design to account for this. For example, instead of the animated timeline the attorney might use in an in-person hearing, the attorney could instead submit a pdf in which one page has two versions of the timeline. On top, there is one version of the timeline that shows one aspect of the case. On the bottom, there is the same timeline, but with several additional entries added to it in order to make a point. In this scenario, the judge can see the top and the bottom versions and the contrast between the two can help make the point in the same way the attorney might use the animations at an in-person hearing. This is just one example. There are all sorts of variations of this, such as including up to three or four versions of the timeline, each progressing as the judge goes from the version at the top of the page to the version at the bottom of the page.

Submit animated videos of the presentation. This is perhaps the most adventurous suggestion, but I suspect judges might be more open to stuff like this given how crazy things are and how much everyone is being forced to adapt to all of the drastic measures being taken across the country. Similar to the previous suggestion, attorneys should think about submitting short animated videos that explain a process or an issue. This sounds much more complex than it actually is. At its simplest level, this is simply turning your animated PowerPoints into a video with narration. It is much easier to do than it sounds. PowerPoint allows all users to save files as movies. The movie file will automatically play all animations. The extra work involves the designer going in and setting the time allocation for each slide and each animated section of the slide. It is not difficult to do, but may require the help of a graphic designer. However, attorneys can create these videos and then record their own narration over the video in which they make their arguments or explain why what the judge is seeing is so important to the case. This may sound like quite a production, but the reality is that this is all very easy to create and does not necessarily require any in-person meetings with the graphic designer (i.e. allows attorneys to still engage in social distancing).