Flags, Focus, and the Importance of Shifting Jurors’ Attention to Favorable Messaging 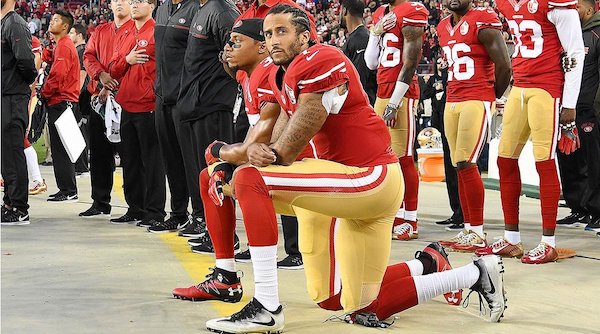 When Colin Kaepernick first took a knee in 2016 during the National Anthem to protest police brutality against African-Americans, the controversy was almost immediate.  The why he was doing it didn’t matter much then, and it doesn’t seem to matter much now. Instead, the protest became about the flag, the military, or even Donald Trump. One survey in October of 2017 showed that while 57% of the respondents checked that “protesting against police violence” was “one” reason for the protests, respondents also checked other reasons: Donald Trump (26%), not sure (18%), something else (20%) and the flag (14%).

This morning, as I was watching yet another story about the “Flag protest,” I wondered if support and/or understanding of the protest would be different if the label was different. While changing the label might help (labeling it what the protest is really about, e.g., “Police Brutality Protest”), what seems to have happened with this protest is that the focus became the flag and anthem as opposed to police brutality and other injustices and inequalities in the African-American community. In other words, the manner over-shadowed the message – the focus was on the protest itself and not the reason for the protest.

Some would argue that the manner brought the issue much more attention than it would have otherwise received. That can be true, while it can also be true that this attention negatively impacted what Kaepernick and others were trying to say. Instead of story after story about police brutality or racial inequality, it was story after story about patriotism and disrespecting the military.

So, what does this have to do with litigation? It provides a good example of how focus on the wrong party (or in this case, action and emblem) can undermine one’s goal. Colin Kaepernick had good intentions. But despite his goal, once the protest was framed as a “Flag Protest” and the spotlight was squarely put on the “unpatriotic” act of kneeling during the anthem, the message was lost. In litigation, the wrong focus will undermine your case.

We have recently conducted several nationwide surveys on how people’s attitudes and experiences shape the way they view a variety of practice areas from med/mal to employment to business. We have found in nearly every survey what, at first glance, appears to be contradictions in the data. Instead, though, what the data highlights is the critical importance of focus.

Let’s take employment cases for example. Our 2017 national survey found that 71% of jury-eligible respondents believe discrimination in the workplace is common; 81% believe not enough employers are held responsible for their poor treatment of their employees; and 77% believe that if management does not like an employee, they will find a reason to fire him or her.

Contrast this against these findings from the same survey: 78% believe too many employees make excuses for their poor performance in the workplace rather than accept accountability for it; 69% believe the work ethic in this country has gotten substantially worse in the last ten years; and 79% believe too many people file lawsuits in an attempt to get money they do not deserve.

Or take the data from our survey related to corporations and product liability litigation. On one hand, 83% believe lawsuits are a great way to force companies to change the way they do business for the better; 80% believe most corporations put profits ahead of consumer safety; and, 82% believe companies are very good at covering up or hiding information about safety issues with their products.

Yet, 74% believe that if a customer fails to read instructions and warnings and is injured by a product, he or she is at fault for their injury; 66% believe that most injuries caused by products are the result of user error or misuse rather than a product defect; and 76% believe too many people expect product manufacturers to protect them from themselves.

For each of these, think about the focus of the statement: employee vs. employer; consumer vs. corporation. This data, and our focus group/mock trial research, shadow juries, and post-trial debriefings have confirmed repeatedly the importance of juror focus. Jurors are substantially more likely to find in favor of the defense when they spend most of deliberations talking about the plaintiff. Conversely, they are more likely to find for the plaintiff when they spend the bulk of deliberations talking about the defendant.

Human nature is such that people are much more likely to tear things down (find reasons to attack, demean, question) than they are to build things up. A corporate defendant who wants to talk about how much they contribute to the community is not going to dissuade jurors from focusing on a lack of testing, huge profit goals, or that damning email that ridicules employees. On the other hand, a plaintiff who wants to spend most of their case focusing on the emotional story of the plaintiff’s injuries is not going to dissuade jurors from focusing on his or her actions (or inactions) that led up to and caused the accident.

For each side, the key is to strike a fine presentational balance that upholds a positive image of the defendant (or plaintiff), while refocusing jurors on the conduct of the plaintiff (or defendant). In the case of the “Flag” protests, as long as the focus is on the flag and anthem as opposed to police brutality and social inequality, not much will change.